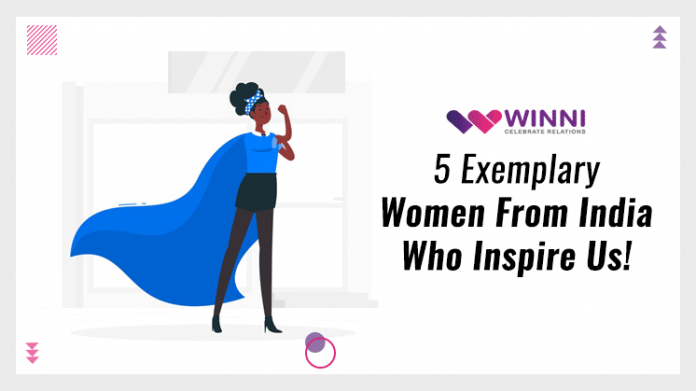 A woman is a mother, a daughter, a sister, a mate, a lover, and a spouse. Besides being all of these, she is a homemaker, a professional, a feminist, a teacher, a manager, and a pillar of the family. It’s never easy for a woman to maintain her composure all of the time. That is why the world salutes women’s accomplishments. Mother’s Day will soon be upon us! It is an ideal moment to appreciate and recognize the mother figures in our lives. Delight them with special Mother’s day gifts and flowers to honor their roles and contributions in our lives.

If we ask you, “As a woman, who inspires you?” what would your response be? Usually, family members will be the first to appear in mind. That’s fine—but look back for a second and remember how many incredible women there are out there with struggles that baffle us and their accomplishments that motivate us.

There are numerous women deserving of honour in their field of excellence; but here in our list, we name a few famous Indian women who have made a lasting impression on the world and continue to inspire us today.

Indira Gandhi is a well-known historical figure who is the first female prime minister in India’s history, which says a lot about her. With her drive as Prime Minister of India, she was a strong, enthusiastic, and inspiring woman and set a good example. She was even thrown out of her party Indian National Congress at one point, but that didn’t deter her. The first woman Prime Minister of India built her own political party and swayed many people in her favour. She exemplifies what it means to be an inspiring woman.

Priyanka Chopra is one of the most well-known faces on the planet today. Her success has been constant since she won the Miss World pageant in 2000. PC has established herself as a phenomenal actress and an accomplished actor in both Bollywood and Hollywood. The prestigious Padma Shri award was bestowed upon her by the Indian government in 2016. She was then named one of the “Most Influential People” in the world on the cover of Time magazine’s prestigious Time 100 issue, and Forbes named her one of the World’s 100 Most Powerful Women two years later.

The former Miss World is a UNICEF Goodwill Ambassador who was honored with the Danny Kaye Humanitarian Award. She is also active in a range of initiatives to protect children’s rights and encourage girls’ education around the world, including the Priyanka Chopra Foundation for Health and Education, which bears her name. With the release of her first title, “Unfinished: A Memoir,” Priyanka Chopra Jonas has officially become an author, adding another feather to her cap.

Mary Kom is a Manipur-born Indian Olympic boxer. She is the only woman to ever hold the prestigious No. 1 spot in the International Boxing Association (AIBA), having won the World Amateur Boxing Championship six times. Kom is also the first female boxer to win a gold in each of the seven world championships, which is a world record. She’s known as ‘Magnificent Mary,’ and she’s been India’s favourite athlete, shining on a range of international levels.

Kalpana Chawla was the first woman from India to go into space, but she’s still a real winner. She was born and raised in Karnal, Haryana, and later moved to the United States to work for NASA. Her space shuttle, unfortunately, collapsed while landing back on Earth, and she died. Everyone remembers her brilliance and courage, and she continues to inspire women all over the world.

In 1978, she founded Biocon, her own company. She is currently ranked 60th on Forbes’ list of the world’s most influential women and India’s wealthiest self-made woman billionaire. She is the Chairperson and MD of Biocon Limited, as well as the Chairperson of the IIM Bangalore. Shaw is also a member of the Board of Governors of the IIT Hyderabad, and the Government of India has honoured her with the prestigious Padma Shri and Padma Bhushan awards for her contributions.

So we find that Indian-origin women have embraced top positions and are continuing to set records. Their impressive achievements in various fields around the world make India proud. Special days like Mother’s Day or Women’s Day are all about inspiring you to cheer on the empowered ladies in your life not just on those times, but every day!